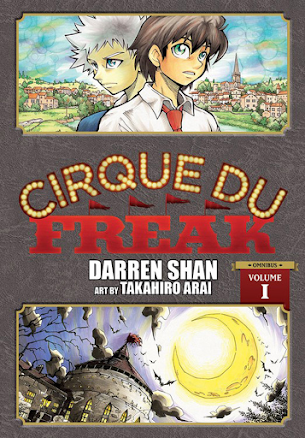 “The Saga of Darren Shan” has been around for two decades. The first book was released in the year 2000 with the twelfth and final release in 2004. An entire saga about a human boy turned vampire and his struggles told over a mere four years! At the time of their releases I was a bit too young for the books. Not too young to discover my love of mysteries and the supernatural, but too young to even know this existed. My introduction to this series was…well, yeah, it was Conan related. I hear your groans, but this time it’s different, hear me out. Detective Conan has a few spin-offs, no surprise there, and there are 5 of them. Most of them are still on-going and none of them are licensed outside of Asia. In fact, only one has been translated into English: “Zero’s Tea Time” which from here on I’ll be shortening the title to “ZTT”. So ZTT is a collaboration between Gosho Aoyama and no name manga artist Takahiro Arai.

Arai’s work was virtually unknown in and outside of Japan until he became entangled in the web of mysteries that is the Conan franchise. He’s had a couple series not including ZTT and “Wild Police Story” (the other Detective Conan spin-off that acts as a prequel following Amuro and other officers that have appeared in Conan, following their adventures at the Police Academy). One of the series he drew before ZTT was announced was called Arago, but there was another that jump started his career, and this is how I found out about the series too.

Arai explains it better in the omake, or manga extra, of the volumes, but long story short: he entered a contest to adapt The Saga of Darren Shan into manga form and won! And so, for three and a half years, Arai drew the series for Weekly Shounen Sunday. Each novel is adapted into one volume. Just like the original novels, the manga spans twelve books. The omnibus Yen Press has blessed us with contains two volumes, so I’ll be covering the first two novels in the series.

In Cirque Du Freak we’re introduced to our main character and narrator. Darren Shan is a normal boy who enjoys playing soccer with his friends, getting into trouble, mostly it’s the kind children usually get into but somethings it gets out of control it becomes trouble with a capital “OH NO”, and horror, especially the kinds with spiders. The first installment of the series sets this saga up nicely. We get to meet Darren and what kind of kid he is and who he chooses as his best friend who is….well, let’s just say if Darren is an angel, Steve definitely is not. Okay, maybe a bit on the nose but bear with me. In the beginning Darren and Steve have a great bond especially in the manga where it’s more romanticized, more bromance-y, if you will. I’ll admit I didn’t like Darren too much at first, but as the story progressed, I became very interested in what was going to happen to him. As I most certainly was not one who enjoys tomfoolery, something about kids who enjoy fooling around makes it hard for me to relate to them, but Darren’s a good kid deep down. Steve’s openly mischievous at the start but isn’t too terrible until the end of the story, but I’ll leave it at that. After Darren steals from Mr. Crepsley his life is sent spiraling. Steve becomes involved and suddenly the relationship between Steve and Darren is strained and eventually falls apart. By the end, you realize how easy it is to feel for Darren who is forced to give up the life he knew because of one mistake.

The ending’s cliffhanger definitely leaves you wanting more, as a good introduction should, but it also is a great beginning for the first trilogy. Also known as the Vampire Blood Trilogy, the first three set of books are about Darren coming to terms with being a half-vampire. In the first book we witness his sacrifices to begin his new supernatural life which leads into the second and third where we continue to follow Darren and Mr. Crepsley as they face many challenges.

The Vampire’s Assistant begins a short while after Cirque du Freak’s ending. Darren is having trouble getting used to his new life and hasn’t even tried drinking human blood yet. Mr. Crepsley tells him he can’t live on animal blood alone, but Darren can’t even think about something so….inhuman. As a half vampire, Darren can still walk around freely in the day but he can no longer be involved with kids his own age: a painful reminder of the humanity he has lost. This book returns the reader to the Cirque du Freak when Mr. Crepsley realizes maybe Darren could use some company with people who can related to his weirdness. The cast in the cirque are really quite an interesting bunch, I only wish we got a little more of them in the manga. It’s clear Arai wanted to focus more on the budding relationships Darren was forming in this new world; such as his relationship with Mr. Crepsley and a couple boys his own age. That isn’t to say we miss out on anything too noteworthy, however. We meet up with some performers from the first book including Hibernius Tall, the owner and operator of the Cirque, and a snake boy about Darren’s age named Evra Von. Evra shows Darren around and they even do chores together, but soon they meet up with Sam Grest, a boy with a love of pickled onions. He wants to join the Cirque but he’s just a normal human so he might have to become a half-vampire too.

I know, I know. I promised you chills. Isn’t the art enough?? Fine. How about a creepy looking man with dozens of hooded little people? I don’t want to give too much away, but his name is Desmond Tiny, and he doesn’t look like someone you want to mess with. When I first got to this part in the original novel I knew we were getting into some deep trouble. If I had to choose a favorite book, it might be this one. The ending is what does it for me. There’s an event that turns Darren’s life (his life is full of turns), possibly even greater than when Darren became a half-vampire. As it’s a great part of the story that you’d get more value out of going in blind, I won’t talk about it here but you owe yourself to read it if this review has got you intrigued.

Cirque du Freak and The Vampire’s Assistant are adapted well as manga and it’s thanks to Takahiro Arai. I really enjoyed his art and storytelling even with his page limit. Arai’s manga makes a few minor changes from the novels, but nothing majorly affects the story. For example: as mentioned before, in Cirque du Freak, when Steve gets the tickets he informs them he was only able to get two. In the novel they only allowed up to two per person, however in the manga Steve tells the boys he was only able to get two tickets as they were nearly sold out. The scene after plays out the same in both version. Another interesting thing is how Arai changed the order of the Cirque’s performances. In the novel, Mr. Crepsley performs in the middle of the line up, but Arai moved him as “le grande finale”. Those two scenes stuck out the most, but there are a few other details that are slightly changed, so I’d recommend checking out both versions if you can. If you’re busy like I am, I’d recommend the audiobooks narrated by Ralph Lister, who does an amazing job with the series. Of course I do have a couple of them in e-book form and all are available digitally, if you’re not into audiobooks and would rather have the text in front of you.

This series is something I never expected I would get to see with my own eyes. It had been out of print for years and unavailable digitally. Yes, since finding out about the series I’ve been reading the original novels, but reading the manga is a different experience. It’s hard to get something to be adapted and likable but Arai definitely pulled through. The art is clean and I can’t help but fall in love with the two sheet spreads. I wouldn’t say the panels flow as well as Aoyama’s might, but Arai has a tendency to put so much detail into every page. You can tell he really enjoyed the series just as much as I am. And on that note, if you can get the physical omnibus I would recommend that completely as it actually includes color pages. Not that the art isn’t amazing on it’s own but do you know how often it is that we get color pages??Especially from Shogakukan?

At the time of my writing this, I’m in the second half of the series (I’ve just finished the 8th book in the series) and I can definitely say I’m loving the journey Darren goes though. I’m trying not to go through them so quickly so I can start reading and comparing the manga as it gets released but I need to know what happens!! Not to mention I don’t mind rereading them since they’re not very long to begin with and this time I get amazing art to go with it.

The more I think about the manga, the more I want to read more of what Arai has worked on, including Les Misérables by Victor Hugo. I couldn’t get into the movie with Anne Hathoway when it came out but I also tend to enjoy the original literature more. If Arai’s adaption of Les Mis is anything like this series is, we can’t go wrong. Maybe when Yen Press releases the 6th and final Omnibus volume they’ll surprise us with more of his work?! All we can do is hope.

Yen Press’ release is a great first entry for those new to Darren Shan and for those who picked up the original releases back in the day it’s worth grabbing these new editions if only because they’re packed full of content. It’s not often we get a novel that works so well in manga format, so Darren Shan is worth reading for that alone. In any case this is a better investment of your time than the movie version. (Don’t watch it, saved you a stream). As for me, well I’ll definitely be back to visit the circus a few more times and I hope you’ll consider coming along! Don’t worry, I don’t bite….much.