Sunday Monsters (Of a Pocket Variety.)

Hello Sunday enthusiasts! As you may or may not know I was at Anime Expo two weeks ago, and had a real blast. It's also why the blog hasn't been updated for a while, but fret not, To reward your patience. I have....Pokemon.

Wait, wait, wait, don't leave. This is actually Shougakukan and Shounen Sunday related! I was able to catch (see what I did there?) the US premiere of "Mewtwo Strikes Back: Evolution" which is a 3D redux of the first Pokemon Movie. As someone who's only seen a grand total of three Pokemon movies, (including this one), it was a real throwback to see the mons on the big screen again. The locale was fairly packed, so the Pokefever still burns bright! Although I'm not going to give a full on review of the movie I did note that the translations were a bit off in the subs, and purists might be disappointed to know that the subs reflect English names for humans and Pokemon alike. (And the meme of Jelly donuts is intact as well for all it's worth.) It's not surprising but still a little bit of a letdown that even this first attempt to give us legitimate Japanese Pokemon was still held back by so many caviats. I do wonder if they'll release the movie on home video with a dub and sub for those who couldn't be at this event? If so I hope they'll reconsider some of the decisions they made with this showing. That aside, the fans there were in a fever pitch and the nostalgic vibes were enough to overcome some of the shortcomings in translation and execution. Sadly I couldn't take any pictures (not surprisingly) but the movie was pretty faithful to the first traditionally animated one, but the effects and animation were great to behold. Plus Satoshi/Ash's Japanese VA Rica Matsumoto was there and gave us a performance of the first TV Opening! 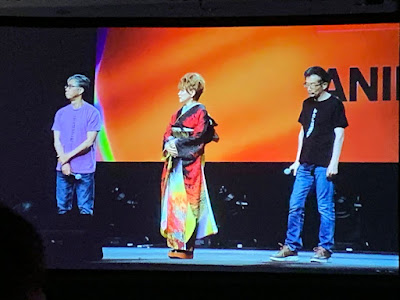 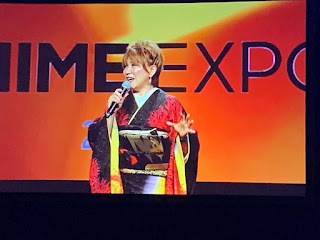 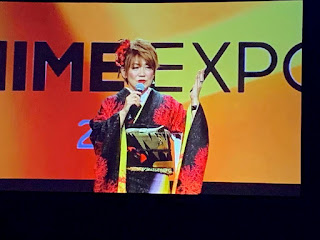 Matsumoto acknowledging fans on both sides of the Japan/US crowd was the most heartwarming thing --she was so happy that she was almost moved to tears as well. On a business point, it was kind of implied there might be more subbed showings of movies (or at least more of an effort to bring us Japanese Pokemon adventures), so those who have been wishing and hoping for this should know that their hopes may eventually be answered! Though I know what you're really wondering....what the heck does this have to do with weekly Shounen Sunday?

Because Shougakukan doesn't have a huge showing outside of Japan unlike say, Shueisha does with Jump, it's probably a bit of a surprise to know that they are in fact the home of Pokemon in the land of the rising sun. In fact, their children's magazine "Corocoro comics" is where most folks get their Pokemon news and info! You've probably read a leak or three if you're a huge Pokemon fan, but no worries I won't judge. 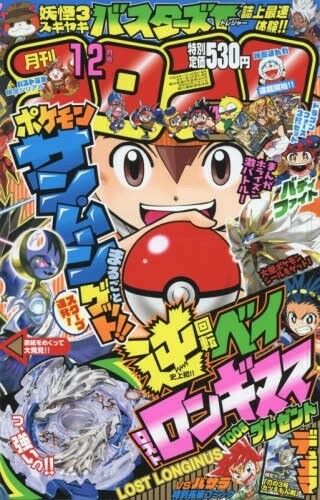 A lot of the time new Pokemon games and anime info come straight from this Shougakukan published magazine! Corocoro has been around since May 15th 1977, and features many worldwide hit manga such as Doraemon and of course, Pokemon. If you've read the "Pokemon Adventures" (known as Pokemon Special in Japan) manga published by Viz media then congrats, you've experienced what kids in Japan see in this magazine. That being said, this is a Weekly Shounen Sunday Blog, so it's still not quite on the mark, or is it? (It isn't, but there is something coming along that is.)

In 2011, around the time the Black and White games of Pokemon were taking the world by storm, Weekly Shounen Sunday decided to grab a bit of what it's younger brother had been doing for years and run a Pokemon manga of it's own! Ladies and gents, I bring you Pokemon ReBurst! 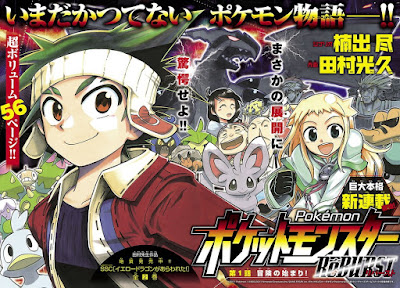 Written by Jin Kusude and illustrated by Mitsuhisa Tamura (The latter of which has drawn a manga for Monthly Sunday Super called "The Appearance of the Yellow Dragon!" and worked with Kazuhiro Fujita's designs for a serial of "Bakegyamon".) this series takes a different approach that we've all no doubt thought about at some point and time --what if humans could fuse with Pokemon? The series ran from March 9th 2011 to October 10th 2012. It's hard to tell if this was a contractual thing where there was a set amount of time they planned to run it or if it just wasn't popular enough to continue (though methinks it might have been a little bit of both which might explain why it's one of the very few Pokemon related things to not receive an official translations.) --but at 8 volumes it's a short enough read if you want to see the Pokemon series that got away. 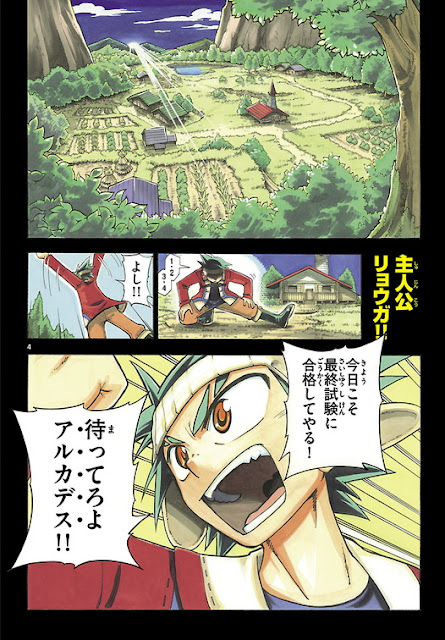 A brief rundown of the plot is this: Ryouga is a boy looking to face Arcades to find out what happened to his lost father. Arcades isn't the talkative sort and only will speak to Ryouga if he's strong enough to best him in battle. After being told it's impossible to do this, Ryouga haaates the word "impossible" with a passion and trains himself hard to one day take down Arcades and find his Dad, while putting a stop to the evil plans of the Great Gavel Organization. 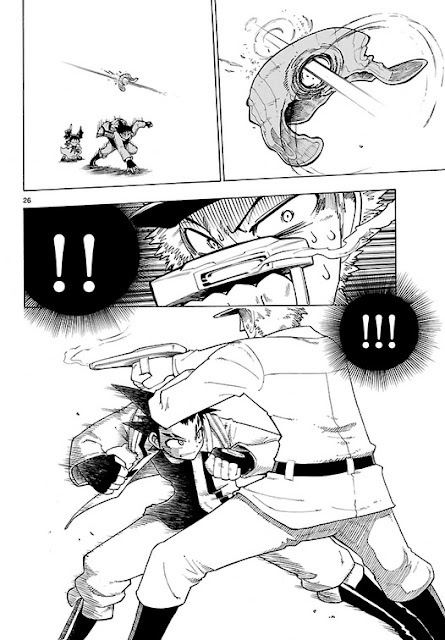 I'd hesitate to call this a more "serious" take on Pokemon, but it definitely features things you wouldn't see in the animated version or games. Tamura's art also does a great job of capturing the madcap spirit of Ryouga as he doesn't let anyone stop him from his goals. 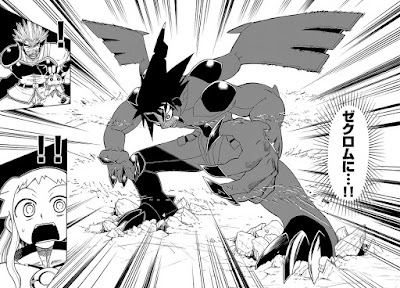 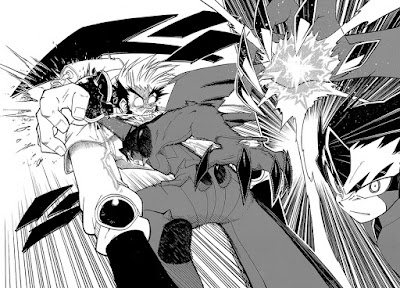 And I couldn't talk about reburst without featuring a few pages of the "bursts" that allow the humans to become Pokemon in the first place! It does look really cool, but I have to wonder if the reason why this didn't "burst" on the scene is because the idea of poke-fusions was just too much for the audience to take? Would it be more popular now than it was before? All questions that I can't answer, sadly. That being said, I would love to see another attempt at a Pokemon series in Weekly Shounen Sunday. 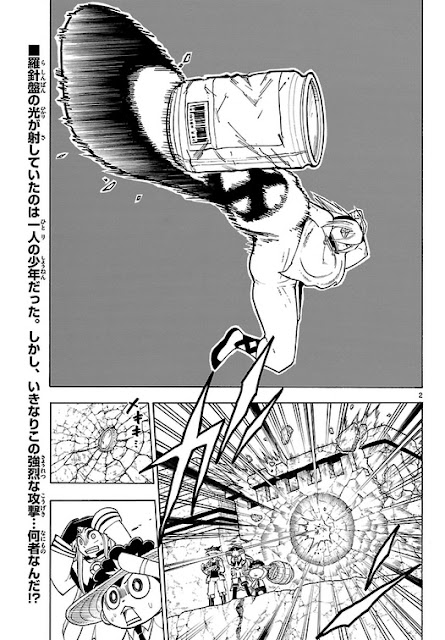 Especially if it has artwork like this. I mean wow! Tamura is currently drawing the "Future Card: Shin Buddy Fight" manga in Corocoro, so if you're interested in seeing what he's up to now be sure to give that a read. Weirdly enough Pokemon ReBurst is not available on twitter (despite all of Mitsuhisa's other manga being available on the service) so you'll have to buy physical copies of reburst to see it. Though I could be convinced to probably cover more of the series if people are interested in learning more. 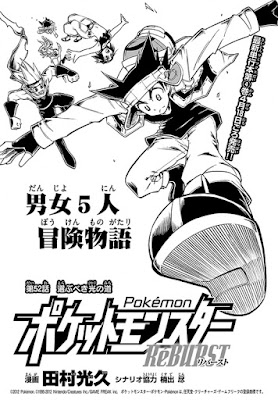 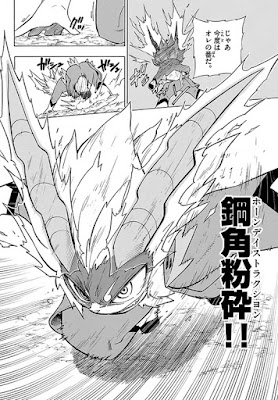 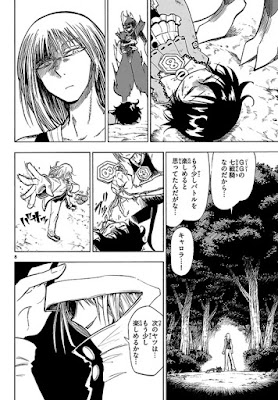 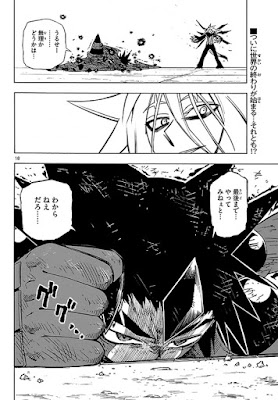 It's doubtful that they'd throw up Reburst on the kindle service now since they've had five years to do so, but I won't give up hope. It does look like a pretty cool series! Despite Sunday being a relative unknown outside Japan, it has quite a high profile to be associated with some of the biggest franchises the world over! So next time you play a Pokemon game or read a news item on twitter, I do hope you'll remember your roots. This is your favorite Sunday blogger over and out!!