Greetings Sunday readers! I apologize for the long, long, long time without any updates on the blog, but circumstances are what they are. I still want to talk about the last few months of the magazine in some way, so stay tuned for that! In other news, I reached out to Viz Media and they were kind enough to provide me with a review copy of Komi-san and a few other Shounen Sunday series! I figure it's better to have something on the blog than to stay completely radio silent, so let's dive right in with the first of hopefully many English language Shounen Sunday manga talkbacks! 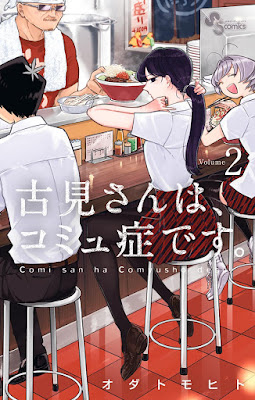 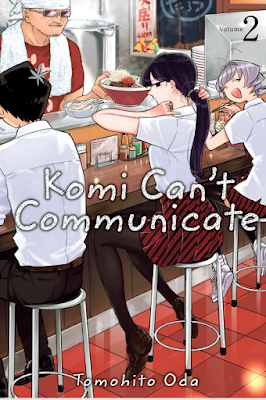 For this occasion I have also purchased the Japanese version of Komi-san --or Komi Can't Communicate. I won't be comparing translations since the pros at Viz are way above my pay grade. (For many reasons one of the most prominent being that their translators are doing this for a job and not as a hobby like me), but I thought it'd be interesting to have the Japanese side by side with the translation --and it's the one unique viewpoint I can offer that other reviewers may not. From the covers, one can see that Viz has put an admirable effort into replicating the Japanese original while adding their own flair. 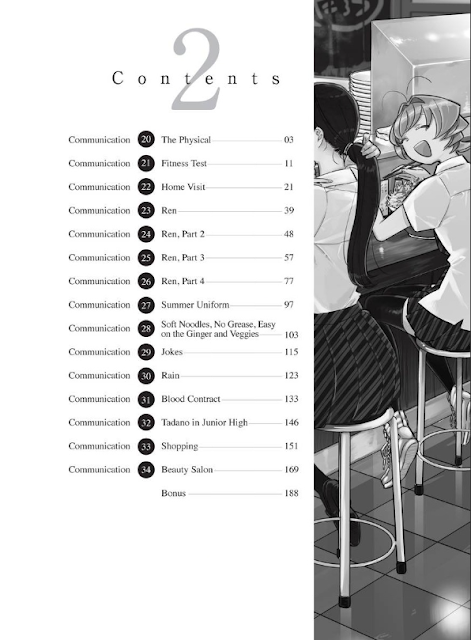 The opening pages of the volume give out the basic premise, but I'll recap. Komi has it all --looks, brains, and the admiration of her class. You'd think she'd be set for her high school life, but she has one little problem --she can't communicate with others. In comes her "ordinary" Classmate Hitohito Tadano who finds out about her secret, and declares he'll help her find friends. A task easier said than done when you're in a school known for it's eccentric characters! 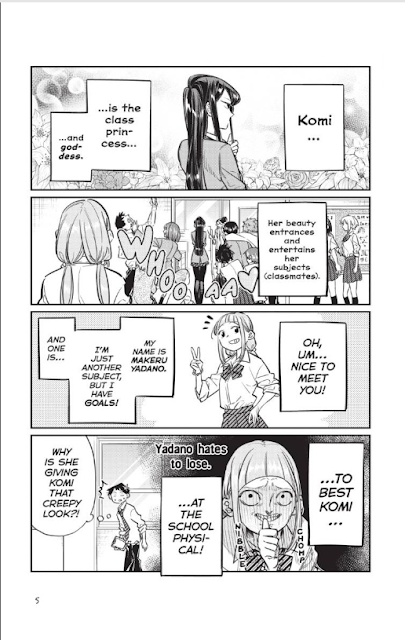 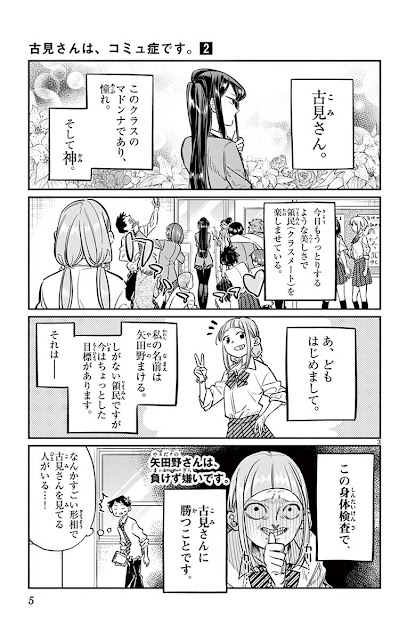 It's a simple premise and Oda (not that one) gets pretty good mileage out of it because his character writing hits that oh-so-sweet mid ground between shounen silliness and unabashed feelings. Not only that, but the characters names themselves tell you what to expect. Take the first chapter of this second volume featuring a one-sided rivalry between Komi and a girl named Makeru Yadano. Makeru having a contest in her head where she bests Komi at a physical of all things is funny enough, but her name pun really gives the reader all they need to know. See, "Makeru" in Japanese means "to lose" while "Yadano" is something like "Don't wanna/I don't like". Part of the fun of Komi is being told what the joke is, and then seeing those expectations get obliterated as things get progressively wackier. 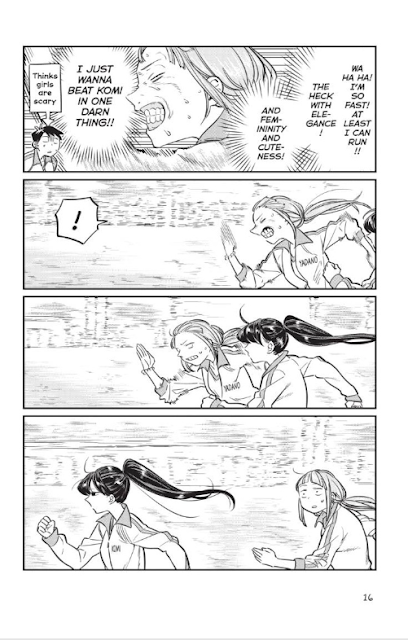 Another part of Komi-san's winning formula is Komi's effortlessness in being well, herself. As Makeru pulls out all of the stops in defeating her (self-proclaimed) rival in the second chapter of the volume, she cites how much faster, cuter and more feminine she is than Komi. In the end however, Komi outpaces her and she just casually admits how beautiful she is rendering her rant moot. Komi's not trying to brag, or even push herself. To her, this is another school day. It's even funnier at the end when Makeru acknowledges Komi as a fierce opponent all while the latter wasn't even aware they were competing! 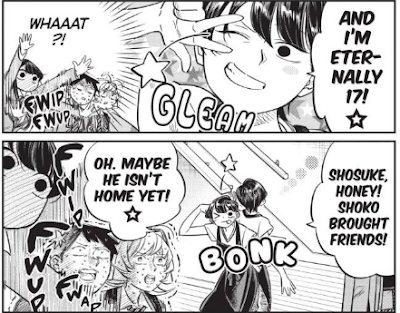 This volume also introduces the audience to Komi's mom: Shuko Komi --who's the polar opposite of her daughter. She even uses the "eternally 17" gag made popular by anime voice actress Kikuko Inoue. So is the an anime fan too?  Once again, Oda sets up expectations and bowls them over expertly making for some great humor for us and awkwardness for Komi's friends. (They try so hard to not bring up her mom when they go to her room, just to find themselves saved by her when the dearth of conversation becomes too oppressive.) 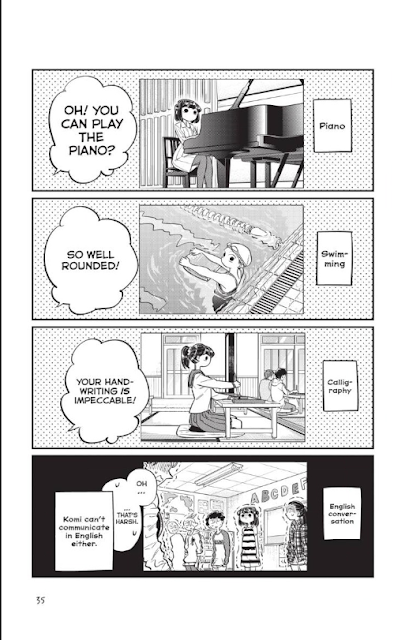 Even in awkwardness the series doesn't forget it's premise --flipping through a photo album, Tadano quickly realizes that she is alone in all of her photos. It's an interesting gap --Komi is so admired by her classmates to a point of fascination. It's because of this however that none of them have tried to approach her. Despite being in a position to be widely well liked and accepted, she isn't. The desire to communicate without the ability has left her in an odd limbo. The one thing she really wants is the one she hasn't been able to grasp.

This volume also introduces (or well, reintroduces) Ren Yamai who asserts herself as a normal high school student. Her name literally means "lovesick". Which sounds cute enough, no?

Except in true Komi fashion, there's more than meets the eye here --she's in love with her classmate which is fine on it's own, but this love is a borderline obsession! (Also I have to point out here that the letterer/editor for this page did an amazing job with this panel. The English font actually does a great job of looking slightly more...deranged?) Ren's obsessive and stalker-ish tendencies are treated as a joke in-universe, but I could see them possibly rubbing some readers the wrong way. She does even go as far as kidnapping Tadano so she and Komi can have some alone time. It's dark humor that's in step with what came before it, but I can see it rubbing some readers the wrong way. 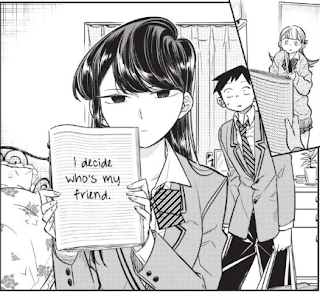 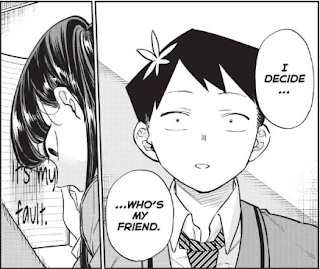 It'll be up to the reader to decide if Komi's moment of character development when she stands up to Ren and declares that she'll decide on who her friends will be makes up for the creepy vibe the whole kidnapping scenario sets up, but it is one of the strongest parts of this second volume. Especially when Tadano shares the same sentiment later when Komi worries that a friendship with her might put him in more danger. They do even make up with Yamai, but she's not one to give up on her tendencies, unfortunately. (I can say to some extent she gets a little better later, at least.)

One small translation note --and one I really like is how the term "Chuunibyou" was handled. To avoid dragging this whole review into a tangent I'll lightly touch on Chuunibyou for those who don't know. It translates out to "Middle schooler syndrome" (some translate it as "Eighth Grader Sickness") and it denotes those who exhibit delusional behavior of 13-14 year olds. In short, it's going through a "phase" which is exactly what another new character Omoharu Nakanaka is going through. (Her name doesn't have a straightforward gag per se, but it does mean something along the lines of "A considerable thought springs" so that's a thing. She's convinced she's a dark hero of sorts and Komi, er, Komilia is her princess. (If you needed any more understanding of what Chuunibyou was, that should give you a fair understanding.) Tadano remembering his own Chuunibyou phase is the best part of his interactions with Nakanaka --how can he refute what he once was? (In fact a bit of his own "phase" is shown in the chapters after this.)  He can't even expect any help from Komi who's completely caught up in Nakanaka's fantasies! Guy's got it hard.

We've all been there, buddy.  Rest in peace.

Komi Can't Communicate is still in it's formulative stages, introducing characters and testing the limits of it's premise. The nice thing about being behind the Japanese releases is knowing there's plenty more where this came from with volume 14 releasing in Japan only a few days ago. I won't spoil too much about later events (it was hard enough not divulging the entire volume here!) but this series really does only get better as it gathers it's main cast and begins to flesh them out. It might feel as if the jokes and story have given one all they can expect with these two volumes, but the stories these characters have still have a lot of promise, as seen between the brief pit stops between comedic moments. The series is moving at a brisk pace but not so much that it's rushing us somewhere which really does feel like the way Sunday series like to operate. Special thanks to John Werry for the stellar translation (those awful puns in one chapter had to have been a nightmare to deal with, but the adaptations were still pretty hilarious!) And Eve Grandt for the touch up art and lettering. I'm constantly impressed with how well the font and design choices were handled in this volume. 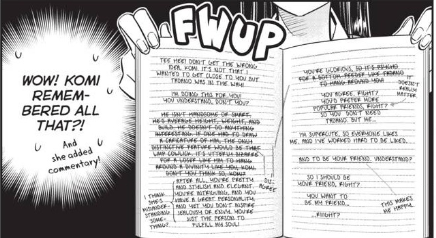 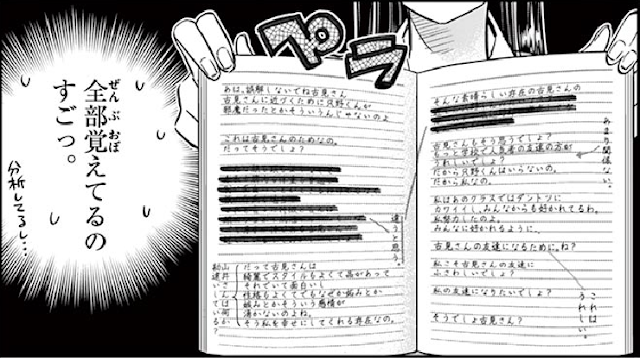 Oda (not that one) doesn't make your lives easy, and I applaud all of your hard work. Most of all, a shout out to Viz for bringing this fan favorite over! I've heard that despite Komi-san having a thriving internet fandom, the sales of Viz's English edition have been super impressive. That makes an old Sunday guy like me extremely happy, and I'm glad to contribute in some way to the continued success of the magazine by writing reviews! So by all means pick up volume two of Komi Can't Communicate and support the cause! Until the next review, enjoy your Sunday....both of them!